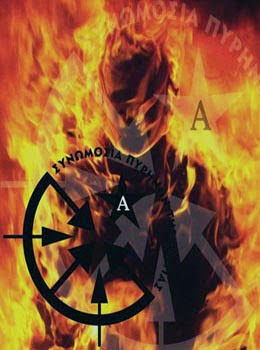 A signal of complicity from the Greek prisons, for the international call of solidarity made from Publicacion Refractario, Colectivo Lucha Revolucionaria (Revolutionary Struggle Collective) and Sin Banderas Ni Fronteras, to our brothers and sister Nataly Casanova, Juan Flores, Guillermo Durán and Enrique Guzmán, who are imprisoned in Chile, accused for attacks made by the International Conspiracy of Revenge and the Conspiracy of Cells of Fire, Chile.
Nothing is uglier than ugliness repeated twice.
Chile: anarchist Enrique Guzmán is arrested and detained.
The reason: the police say that traces of his DNA were found at a distance from a target where a bomb was placed, which is included in the case for which our brothers and sister Juan Flores, Nataly Casanova, Guillermo Durán were arrested, 6 months ago.
The real reason: Guzmán was a friend of the three imprisoned comrades, who did not abandon them for a moment in the difficult conditions of captivity. He was the friend who despised police looks and checks and visited them often in prison. He was the friend who, with his communication, canceled their exile and loneliness, in the land of the locked up people.
He is the friend who proves that real friends do not flinch, but share both the laughter of joys and the steep hills of sorrows…
The battle, however, is uneven. Anyone who does not comply or does not discipline himself within the limits of the permissible morality of the silent people who bow their heads, is driven to the place of exile, in the cold prison cells.
Nataly, Juan and Guillermo refuse to accept fear. They deny the fear of the emotional blackmail of power, which leads their friend in the belly of the beast of prison. They decided to act. Because, when we do not die for each other, we are already dead. From the first moment they begin a hunger strike, whose main demand was the immediate release of Enrique Guzmán but also the lifting of the isolation measures of Nataly, the stopping of the harassment of cops against their relatives and the review the validity of the DNA process.
Twenty days later, authority is testing their strength, as it seems tenacious. The ugliness is reflected in carbon, making repression montage from Greece to Chile. In Greece, some time ago, power has tested its revenge on us in the same way. It detained the mother of two comrades of the CCF and the girlfriend of one,  for the caseof our attempt to escape from prison. If they can not conquer your thought, then they aim at your heart. They want to domesticate you and turn you into an obedient pet.
Prisons are the zoos for people. Even the sky is covered by barbed wire. Over time, the zoo prison, becomes the home for most. But there are those who do not fit in a cell. They are those who didn’t put the wolf inside them to sleep. They are those who feed him every day with rage, anger, revenge, walls, irons, locks, those who grow him big with fury and conscience to seek breaths of freedom…
Nataly, Juan, Guillermo and Enrique are our brothers without sharing the same blood with us.
We share, however, the same desires, same anxiety, same anger for the bastards that wear uniforms, memorized the laws and locked our lives and our friends.
The taste of hatred for the society of judges, cops and their subordinates dries in our mouth like poison.
It’s the taste of helplessness that prison triggers. It’s the anger and outrage for all those you plan but are unable to materialize, as you are surrounded by bars, cameras, guards.
All is left are words… Words of solidarity and strength to Nataly, Juan, Guillermo and Enrique.
But Brothers, do not worry… These words do not resonate in the void. They forge inside us the internal anarchist attack and sear it with an indelible mark on the soul. We know that there are wolves ready to hunt the humans of law and order everywhere. There are our brothers, Alfredo and Nicola in the Italian prisons, there are dozens of FAI cells all over the world, ready to set the nights on fire and make them sparkle in the colors of fire, there are anarchists of praxis and nihilist comrades of new anarchy who weave the conspiracy of the Black International everywhere.
No more unfinished words, half actions, half thoughts… It’s better to be a demon of vengeance than an angel of forgiveness. We wholeheartedly embrace the dark abyss of war to burn the idols of law and order, in the flames of chaos and anarchy.
“We feel like hitting our heads against irons. Many heads will break… But, in the end, the irons will bend”
SOLIDARITY – STRENGTH – COMPLICITY WITH OUR BROTHERS NATALY CASANOVA, JUAN FLORES, GUILLERMO DURAN, ENRIQUE GUZMAN
Conspiracy of Cells of Fire – FAI/IRF
Imprisoned members’ cell
(via inter arma)

Posted by Insurrection News at 10:41