PDF zine about the comrades on hunger strike in Chile 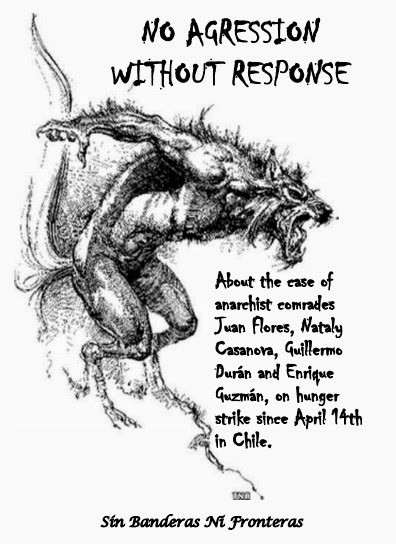 No aggression without response
Arrested since September 18th 2014, comrades Juan Flores, Nataly Casanova and Guillermo Duran are accused of involvement in bomb attacks which occurred on July 13th, claimed by International Conspiracy of Revenge, and September 8th 2014, claimed by Conspiracy of Cells of Fire (Chile). They deny charges but claim themselves as anarchists.
On April 6th 2015, Enrique Guzman was arrested, a solidarious comrade and friend who visited the comrades in prison.
On April 14th 2015, the four comrades started a hunger strike demanding:
– the release of comrade Enrique Guzmán.– the immediate transfer of compañera Nataly Casanova from solitary confinement to a wing/tower where she will be able to have contact/relationship with other inmates and more hours in the yard.– the end to harassment of their close friends and family.– the end of assaults and disciplinary sanctions towards Juan and Nataly;– end to DNA-based prosecutions.
This brochure includes texts by the comrades, about harassment against them and their close friends and family. Also, we include a solidarity call that we have published with other groups. Most of the text was translated to English by the comrades of Act for Freedom!
Download HERESOLIDARITY – COMPLICITY – ACTION AGAINST POWER
Sin Banderas Ni Fronteras, (No Borders/No Flags), nucleus of anti-authoritarian agitation.
Chile. 2015 / sinbanderas.nifronteras(at)riseup(dot)net
(via 325nostate)
Posted by Insurrection News at 11:06