Spain: Two members of the International Brigade who fought in Rojava arrested 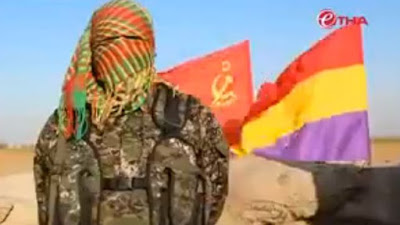 URGENT: 2 SPANISH MEMBERS OF INTERNATIONAL BRIGADE ARRESTED
During this morning, the repressive forces of the Spanish State are carrying out the arrest of the comrades who have been fighting the fascist forces of DAESH (Islamic State) in Rojava. Due to the lack of further information, we ask you for support, solidarity and spreading the message.
The homes of the comrades were searched by investigators of the Provincial Brigade Intelligence Office of the Madrid police. These comrades are two militants of the Partido Marxista-Leninista (Reconstrucción Comunista) that are accused by the police of appearing in this video. Police said that the two activists came into Syria via Turkey and Germany. They are accused of participating in an armed conflict outside Spain without the permission of the State, of collaborating with a terrorist organization (this is probably the PKK – Kurdish People’s Party being described here), use of military weapons and explosive devices, and of seriously undermining Spanish national interests. Reconstrucción Comunista is an organization composed of members of the Communist Youth who have broken with the Partido Comunista de España, PCE. Its founding members initially were active in this organisation before founding their own organization, close to the MLKP (Marksist-Leninist Komünist Partisi – Turkey) in 2009.
WE WANT THE SPANISH MEMBERS OF THE INTERNATIONAL BRIGADE WHO HAVE FOUGHT ISIS TO BE RELEASED WITHOUT CHARGES!
DEFENDING THE CIVIL POPULATION FROM ISIS TERRORIST ATTACKS CAN’T BE PERSECUTED!
FREEDOM FOR THE ANTIFASCIST COMBATANTS!
INTERNATIONALIST SOLIDARITY IS NOT A CRIME!