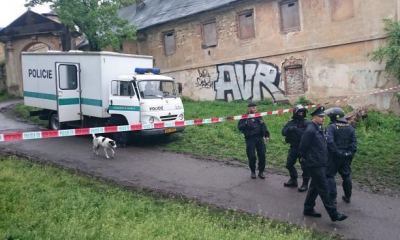 May 6th, 2015
Today police evicted the only squatted place in Prague, Cibulka. In a massive raid 200 cops with water-cannon and even a helicopter arrested at least 12 people, at least 4 people were injured. There were around 50 people present in the place when the police came, most of them left the premises voluntarily. Four people occupied the roof but were forcibly removed. It is still unclear what exactly happened as police closed off the whole surrounding area. At least four people are in hospital now. At least 12 people are being held.
Cibulka was occupied by squatters two years ago. Soon they managed to sign an agreement with the owner, semi-public company Autoklub. For two years it was used legally, but that did not prevent police from raiding the place several times. Last month the contract was recalled by the owner. Yesterday evening the owner made a formal complain to police, today the place was evicted. It is an unprecedent speed of police work in the country where it is usual to wait 8 or more years for a court verdict and generally the justice system is very slow and ineffective…
From ABC.

Posted by Insurrection News at 08:40