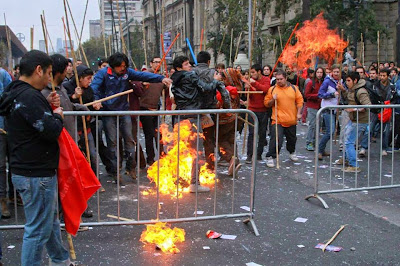 On the morning of May 3rd we delighted the Communist Youth with a remodeling of the facade of it's headquarters with paint and made a change to it's windows with rocks.

These wastes of space have arduously sought reconciliation with democratic power and it's police apparatuses and have devoted themselves to issuing legalistic threats via the press against anarchists over clashes that occurred a year ago. It seems they have forgotten what happened. Despite the amount of time that has elapsed, we have not forgotten and this attack is a reflection of that and there is still more to come.


We claimed this action with pamphlets in solidarity with the comrades Juan Flores, Guillermo Duran, Nataly Casanova (on hunger strike for 20 days) and Enrique Guzman, who have always spoken out against all forms of power and authority. Know that we are attentive to your situation and we will not rest until the democratic powers cease their harassment.


No time for excuses or pauses,
Combative solidarity with the prisoners on hunger strike.

*photo is from the clashes with Communist Youth on May Day 2014.

Posted by Insurrection News at 04:43