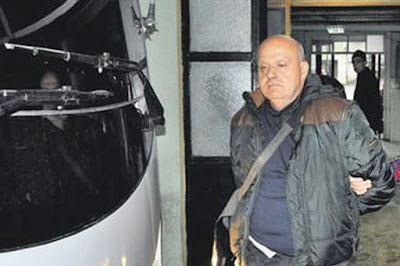 
On the 2nd of April, the fascist AKP government regime in Turkey, illegally raided the İdil Culture Centre (İdilKültürMerkezi) in Turkey. İdil Culture Centre’s workers and GrupYorum Members have been arrested then detained after being dragged from the premises and later tortured. British national Steve Shaw Kaczynski was detained at this time and remains without charge held in severe isolation conditions.
This follows major and continued unrest in Turkey where the US backed AKP fascist government continue to arrest and detain without charge any person who does not agree with their ideology and policies. Those who differ from the AKP are labeled as ‘terrorists’ where any dissent is not tolerated and where brutal and violent force is often used. Furthermore, under the AKP government, workers that are unemployed, students that are protesting for free education, traders that cannot obtain enough work, journalists and independent press often have little or no rights and are continually arrested as criminals and terrorists.
Who is Stephen Shaw Kaczynski and what is his crime?
Stephen Shaw Kaczynski was born on the 5th of July 1963 in Edinburgh, Scotland. He attended Linlithgow Academy and then went onto study Russian and German at the University of Edinburgh in the 1980s. He is currently and has always been a British National. Stephen worked for several years for the BBC World Service based in Reading, England and has also worked as a Sub Editor for various newspapers. Stephen is a kind and gentle man who abhors violence and has long campaigned for Human Rights and political freedom. He is a much-loved son, brother and uncle.
In 1996, when Stephen was working for the BBC, he began to learn and understand the struggles against Turkish government oppression forming friendships and supporting individuals from the Turkish left who were on ongoing death fasts in Turkey. Being a man with deep concerns for human rights abuses around the world and whom is also a socialist has a long standing affiliation and connection with Turkish culture. He speaks fluent Turkish and has for many years supported the Turkish community living in England for example with translation of official documents, help with employment matters, immigration issues and other general support where needed. Stephen has helped to defendpeople’s rights in many different ways over the years and has participated in symposiums, seminars, panels, especially in relation to the continuation of Turkey’s Death Fast resistance, where 122 individuals have been killed in F-Type prisons.
What does the AKP fascists want to do?
The fascist AKP government wants to frighten people at all levels of society with the continual slander of innocent people to discourage their ideas with the systematic goal of trying to pressure people to forget their political identity. The AKP label foreignindividuals like Stephen as ‘agents’ where they try to discredit them. Stephen was in Turkey for the purpose of international solidarity against fascism and was arrested on unsubstantiated claims by the AKP police. Media channels and newspapers commissioned by the AKP informed people that Stephen was an ‘agent’ and whilst there is no evidence of this, the court and prosecutors have still not asked Stephen about this. After the raids, there has been different media claiming that Stephen is a ‘British agent’. There is categorically no truth in this accusation. Whilst Stephen has been under police custody, the AKP backed media have portrayed him as a traitor to his activist friends and to the beliefs he has always stood for.
How can we help and support Steve?
We, as a committee for Steve Kaczynski’s freedom, are supporting our comrade with letters and cards ensuring that Steve feels our love, solidarity and our respect for him. We do not believe the lies that have been said against him. We will oppose his illegal arrest and will be his voice in this, his country and in Turkey. We invite all Human Rights defenders, our friends and our people to support Steve by writing letters and sending cards to him. We are repeating the slogan that Steve had shouted during his arrest, ‘PRESSURES CANNOT INTIMIDATE US!’.

Help us to protest against the unlawful arrest of Stephen Kaczynski. You can help by sending a fax to the Ministry of Justice in Ankara and phoning to ask why Stephen Kaczynski has been unfairly arrested.
The Ministry of Justice
Telephone: 90 (0312) 417 77 70
Fax: 90 (0312) 419 33 70
E-mail: ınfo@adalet.gov.tr
Address: 06659 KIZILAY / ANKARA
Please also support Steve by writing letters and cards to:
Maltepe 3 No.lu Hapishanesi, Yabancılarbölümü
BüyükBakkalKöyMah. YakacıkYoluÜzeri
NO: 13 MALTEPE - İSTANBUL

In the United Kingdom please contact the following to ask for their support and help with the immediate release of Stephen: