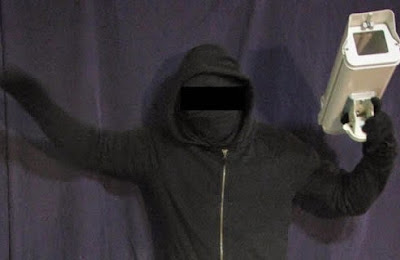 On the night of May 3 a few surveillance cameras were taken down from the unfinished developments they were attached to in the Mantua neighborhood, just north of University City in Philadelphia. Removing plastic cylindrical cameras is not hard, grabbing and pulling down or using a long stick is enough to knock one down quickly.
As neighborhoods gentrify, policing changes as well, shifting to protect yuppies, students, and new businesses, always at the expense of the marginalized and exploited. Surveillance cameras are an encouraging nod to those who feel the police will protect them, and a reminder to the rest of us that the pigs are always just around the corner.
This fun and easy action may not have much impact by itself, but if this type of activity multiplies we can create pockets of opacity in otherwise gentrifying areas. The removal of surveillance cameras makes room for other, more damaging anti-gentrification attacks to be taken with less risk.
We're more than excited to see that comrades have been attacking gentrification in West and South Philly.
Down with gentrification
Down with the prison society they build around us

(via anarchist news)
Posted by Insurrection News at 18:21