Mexico: EPR Calls For A Boycott of the Upcoming Elections 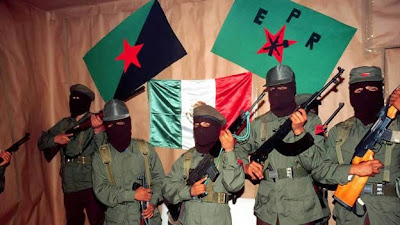 05.05.15: The insurgent guerrilla group, EPR (Popular Revolutionary Army), has today released a statement in support of boycotting the upcoming elections. Calling voting, supporting the terrorism of the State.


“History has shown us that voting legitimizes the regime, which is responsible for the conditions we the people live in, misery and poverty. Voting is legitimizing the unemployment and low wages. Voting legitimizes and supports the erosion of our constitutional rights and our inalienable human rights such as the right to employment, education and life. It is legitimizing the terrorism of the State against the people, accepting and applauding the assassinations, forced disappearances, extrajudicial executions, torture, repression, harassment and hunger over the people as political terrorism.”
They mentioned the case of the students of Ayotzinapa, that were disappeared by the State, adding, “It is clear that these crimes against humanity is a crude reflection of what this police state is and the terrorism of the State. The repressive and unpopular government continues with their criminalization of popular discontent, solidarity with the normalista students of Ayotzinapa, is the proof that the State has neither the will nor the means to find the detained/disappeared because it is the one responsible for that. It is proof of its participation in the crimes against humanity. From the government institutions, it denies its role in these crimes of the State.”
(via mexicanarchist)
Posted by Insurrection News at 10:03