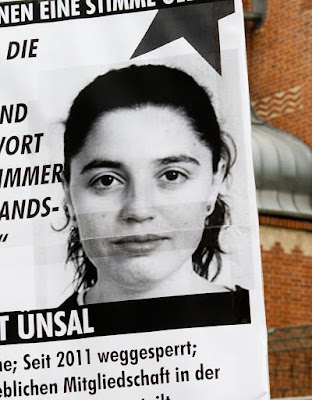 ‪Berlin,‬ 29.05.15: Comrade Gülaferit Ünsal an activist from Turkey who was sentenced to 6.5 years in 2012 after being convicted under the draconian paragraph 129b law for allegedly collecting funds and organizing training for the militant left Turkish organization DHKP-C (Democratic People's Liberation Party-Front) has ended a 54 day hunger-strike after prison authorities finally relented and agreed to meet all of her demands.

Gülaferit was fighting for her right to have Turkish-language newspapers, magazines & books sent to her and for a campaign by prison authorities that involved them using violent prisoners to intimidate and harass her to end.

An agreement was signed by prison authorities in the presence of Gülaferit and her lawyer Canan Bayram. Canan stated afterwards that it was absurd that Gülaferit had to hunger strike for over 50 days just to get her basic rights as a prisoner.

Red Aid, the Network for Political Prisoners, Turkish organizations, anarchists, communists and autonomists all supported Gülaferit throughout her hunger strike visiting her many times and mobilizing every few days to stage public demonstrations in solidarity with her struggle.

The news of the successful conclusion to Gülaferit's hunger strike was met with much joy by her supporters, at the time of the announcement around 60 of them were demonstrating outside the jail.

Red Aid and other organizations and supporters will continue to provide solidarity for Gülaferit and of course will be monitoring the situation to ensure that the authorities stick to their agreement.

Declaration (in German) from Red Aid Berlin
Posted by Insurrection News at 07:29